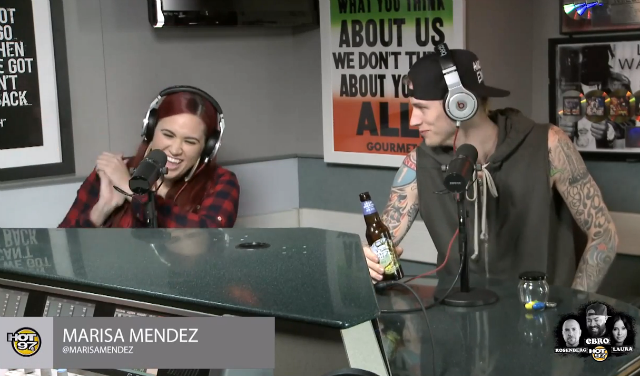 The Bad Boy rapper stopped by to discuss his new single and its powerful visual, “A Little More,” and of course he got into plenty of other topics with Ebro and I as well.

On coming out at the same time as Kendrick and others, and being overlooked:

That was a crazy month for me, because multiple peers of mine came out the same month and shot to the top. You know, Kendrick was also two weeks after [I released my debut album] or a week after mine, and we’re on the same label and stuff so, I ate a lot of humble pie. Of course I was frustrated. I was frustrated, I was depressed, I was manic, I was obsessive. I had Frankenstein in my office the whole time and no one knew about it…and maybe still don’t know about it.

On the message behind the video for “A Little More”:

It’s more of the world through my point of view. So I see a lot of ugly things. It’s a lot of chaos going on in our generation right now, and a lot of it starts with us. So you’ll see some graphic images and situations that are very like, close to home, and it’s something that we can log on Worldstar and see every day, or that we can talk about on Hot 97 every day. I mean like, a lot of stuff is funny for the moment, but you look back on it and it’s really disgusting, you know what I’m saying? And if you’ve ever lost anybody to self-harm or if you’ve ever had a friend who’s passed away because of violence, you realize that this one angry moment or this one lack of responsibility that you could have taken took a father away from his child, took a husband away from their wife, took a son away from their father. These are all things that we don’t think about in the moment.

I’ll say it like this – everything was completely natural. It wasn’t anything that I had expected or had planned or anything like that. You know, when the universe throws something your way or things happen, I’m one of those people that goes with it and I don’t fight it. And I had no idea what came with that. I mean I’d be a liar if I didn’t say that it’s not like a struggle every day coping with that fact that it is one of the most anti-spotlight people ever and one of the most in-the-spotlight people ever. Along with the flack that will come with it from people unknowing of the situation – which I accept and I don’t blame anybody for – it’s just because ignorance is bliss, so if you don’t know the situation, it’s like…you know. But it’s like one of those things where it makes you re-think this whole fame thing again.

Check out the full interview below!