While Wayne has done his own thing with Young Money for years now, it’s always been alongside the Numba 1 Stunna, combining the two into one phrase with YMCMB. (Which stands for Young Money/Cash Money Billionaires.) Since signing under Birdman in the late 90s, Wayne has become one of the biggest rappers in the world, and has gone on to launch the careers of fellow superstars Nicki Minaj, Drake, Tyga and more. Both Tune and Baby have always expressed their love for each other no matter what, but it seems like times most certainly have changed. Could Birdman’s focus on Young Thug and Rich Homie Quan as “Rich Gang” be the issue?

“To all my fans, I want u to know that my album won’t and hasn’t been released bekuz Baby & Cash Money Rec. refuse to release it,” Wayne began in a series of tweets yesterday afternoon. Tha Carter V was scheduled to drop this coming Tuesday (December 9,) but it seems that’s no longer the case. “This is not my fault. I am truly and deeply sorry to all my fans but most of all to myself and my family for putting us in this situation. I want off this label and nothing to do with these people but unfortunately it ain’t that easy. I am a prisoner and so is my creativity Again,I am truly sorry and I don’t blame ya if ya fed up with waiting 4 me & this album. But thk u.”

He ended his announcement with one word: “Pray.”

Immediately upon Weezy‘s first tweet, Pusha T put the ‘T’ in troll, seeing it the perfect time to send some friendly jabs (since they’ve had a beef in the past.)

@LilTunechi if u wanna drop albums & don’t want your CEO’s rubbing they hands all in your videos, COME TO GOOD MUSIC!! (Suge Knight voice)

Of course Tune didn’t answer, but fans got a good giggle out of the harmless tweets. He also added lyrics from a previous song, which seemed to perfectly detail the situation. “I never lied to the people not one time,” he wrote. 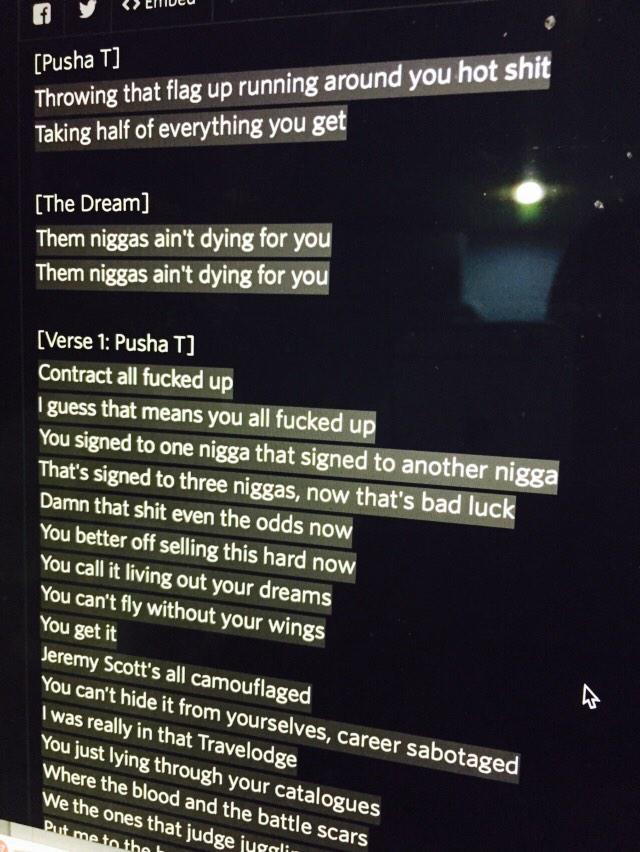 After his very publicized discontent with the very same label just a month prior, Tyga was probably outside of a high school waiting for Kylie Jenner in all of his glory, and of course had to add his two cents on the situation as well.

“…@LilTunechi is LEGEND,” T-Raww wrote after retweeting Wayne‘s “prisoner” tweet. He then went on to say that his forthcoming The Gold Album will be “my first independent release 2015,” which both goes against the recently-announced date of December 23, as well as seemingly reveals that he’s gotten off of YMCMB.

Wayne, on the other hand, doesn’t seem like he’s going anywhere. Not only did he re-up on his deal through Cash Money/Republic for 3 more albums back in 2012, but his manager says everything is a-ok! Talking to TMZ after leaving an L.A. club last night, Cortez Bryant assured the world that Wayne “will be Cash Money forever,” and that there are no issues.

What in the world is going on? Time will only tell! Let’s see what happens on December 9 first!