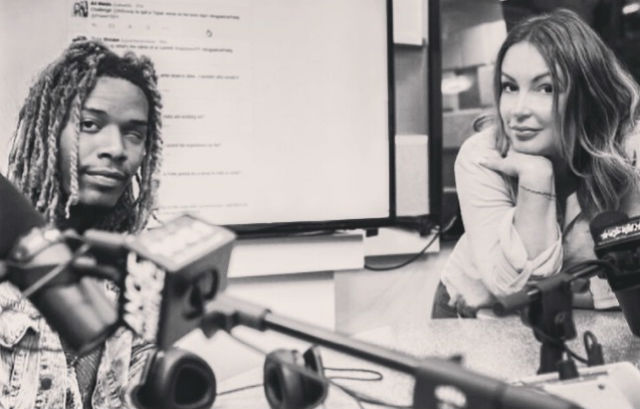 Fetty Wap stopped by The Angie Martinez Show for his first time, and this may be one of my favorite interviews of his yet! Angie got the New Jersey native to open up, and he happily shared some funny stories about his eye, his hobbies and more.

Get a run-down of the 7 new things we learned about Fetty Wap below, plus the full interview.

1. He got his first pair of Jordans two years ago on his 21st birthday.
He now has over 500-600 pairs and collects them as a hobby.

2. He likes to just drive around for fun. He has a reason, though.

“I ain’t think I was gonna be able to drive because of what happened, you know what I’m saying? Because of my vision. So when I actually went to get my license, funny story is I went there with my prosthesis and I never said nothing to nobody. I went to the doctor and everything so this how I got caught. So when I went to the doctor, you know you got to do the eye test! They made me cover my eye. But what happened was the doctor said I was standard because I had 20/20 vision in one eye. So being that I could see so far and my peripheral was extra wide in this eye…at the time. That was before I started smoking. So I was able to get my license! So once I got my license, I felt like that was an accomplishment that I ain’t think I was gonna be able to accomplish. So to other people, that was regular to them. Like, ‘I’m about to get my license. We’re 16, blah blah.’ With me, it was like, ‘Man, here we go! Let’s see!’ And then I got it.”

3. He still feels like he’s not a celebrity, so he doesn’t want to hang out with people who are.

“They’re already famous. I don’t like hanging with famous people, because I still feel regular. When I see people, I see people like they’re changing. Not necessarily changing in a bad way, that’s just how they feel. That’s their personality. That’s how they feel – they don’t want to be like how they were before. Like me, ain’t nothing changed about me.”

4. He’s still in the hood, but he moved his mother out.

5. Though he’s from Jersey, he’s never really listened to Jay Z or Nas.

“Some people criticize me for that, because I don’t listen. But most of my family from the South. So most of the time, once school is out, we go down South. So it’s just like whenever I go down to my cousin’s, they all listen to Gucci Mane. Gucci Mane, Young Jeezy – all trap music. Lil Boosie, at the time Slim Thug, Project Pat, 3 Six Mafia, Juicy J. I ain’t listen to no up North rap. I didn’t listen to nobody. My cousins up here, on the other hand – they listen to Jay Z. Of course I know who Jay Z is, Nas, but if you ask me can you recite a verse, I can’t recite them. I just keep it real, though, you feel me? Some people would lie to you, then you catch them in a concert…”

6. His nickname used to be One-Eyed Willie.
He took his prosthetic eye out around 12-years-old one day randomly in school, and since he only has one eye and his real name is Willie, it stuck for a while.