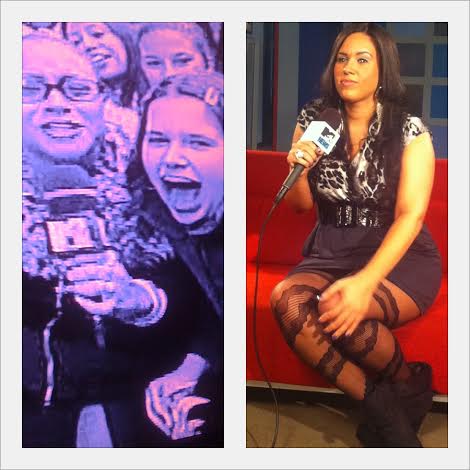 People ask me all of the time how I got started with Flex and how I launched my own site, which then leads them into asking me how to go about doing so for themselves. To answer all of your questions in one place, I’ll break down a brief history of how I got started, and then share some tips on how to either start your own site, or to become a part of one that’s already out there.

Remember when I got fired from MTV for blogging in late 2008? Yeah, I thought my life was over at that point…but I also knew that I needed to hurry up and get myself another internship. While in the car with Karen (Civil, who I met back in my Dip Set days, as explained here,) she told me that Funk Flex was looking for a new intern, and I immediately jumped on the opportunity. I had a great referral from KC (who’d interned under Flex years back,) so I was able to land the gig, and interned at Hot 97 from January 2009 through August 2009. The internship ran parallel to my last semester in college, so when the internship ended, so did school…and it was time to head into the real world. Admittedly I did nothing spectacular for Flex and his team to want to keep me, since I never really picked up on how to edit audio, set up a DJ booth or record calls. I did, however, do what I could to the best of my ability at the time, and I made sure to maintain relationships with everyone, even after I left.

An entire year later, I stopped by to visit some of the people I maintained the aforementioned relationships with. It’s September 2010 now, and I’d been miserable in my boring 9 to 5, and was actually looking into grad school in Miami at the time, simply for a change of pace. As fate would have it, though, that wasn’t in my cards.

While standing around chatting with some of the Hot employees, Flex approached me and asked if I knew my way around a computer. “Of course,” I said, interest piqued. “Can you write?” he asked me. “Yeah, I’m an amazing writer!”

Next thing I knew, he told me to show up Monday to write for his new blog, InFlexWeTrust. Had I ever blogged before? Not really. Did I know what WordPress was or how to operate it? No clue. But I was going to figure it the f*ck out come Monday, I’ll tell you that much!

I went straight to Karen‘s house after I left the radio station, and sat with her as she showed me WordPress for a couple of hours. For the rest of the weekend at home, I made my own WordPress account just to practice, and spent hours reading other popular blogs to figure out how things are worded, how they’re presented, where they get their info from and more. Once Monday came, I was off and running, and my first-ever post was Kanye‘s “Runaway,” since he’d emailed it to Flex as I walked into work that night. The pressure!

Neither Flex nor I knew what we were doing too much, but we figured it out together along with the rest of the growing IFWT staff, and here we are today. In the beginning, I blogged from 10am to 12 midnight, Monday through Thursday, then all day Fridays, even the weekends for a couple of months until we got more staff. I worked 8am to 4pm at my desk job for a management office in central NJ (while simultaneously blogging,) went home for an hour after work to eat dinner, then went into Hot 97 to be there from 7pm until midnight. I had a weekend job at a yoga studio too (random!), and would blog from the front desk while I checked people in to their classes on Saturday and Sunday mornings. Yes, I worked 7 days a week, all day and all night.

After 6 months, my day job gave me an ultimatum – IFWT or them, and though I wasn’t making nearly enough from Flex to survive on just his income, I took a leap of faith…and it worked out. I haven’t looked back since. Did I have to borrow money a couple of times? Yes. Did I have to beg Flex for a raise and break down every reason why I deserved one? Of course. Did I have to use every single one of my connections to grab up a couple smaller blogging gigs for more money? Duh. But my dedication to Flex‘s site never wavered, and as we grew, my salary did too…and so did my name. Now I have enough of a name to maintain my own website, all because I pushed my way through even the hardest of times.

I say that to show the dedication I had, which many don’t seem to understand when they start. My situation was a tad extreme, but it’s not uncommon, and people seem to think that they’re going to be the next Karen Civil from the second they start typing, and quickly lose interest when they find that’s not the case. This doesn’t happen overnight, nor in a week, nor in a month. I was with IFWT for FOUR YEARS before I felt comfortable enough to launch my own site, and even still I’m taking baby steps with it. My biggest tip of advice to those who want to get started: BE. PATIENT.

This interview I did with The Phat Startup breaks down my tips for becoming a blogger, though I’ll summarize briefly: intern, WORK HARD, be realistic, know your audience, build relationships both in person at events (if possible) and on Twitter with the right people, get exclusive interviews by reaching out to the venues in your area and/or the promoters, WORK HARD, don’t be careless with grammatical and spelling errors, be receptive to feedback, juggle a million paying jobs at one time to maintain your free work for a major site if you need to, WORK HARD, and as previously stated, be patient. Watch the full interview here:

Good luck! Hit me on Twitter and keep me updated on your journey!

On April 20, 1999, I made a sign out of construction paper and stood outside of the MTV studios in Times Square to put my love for that day’s TRL guests, 98 Degrees, on display. 12.5 years later, I was sitting inside with the MTV mic in my hand, naming my favorite songs of the moment as an “industry insider.” Push. Persevere. Believe.