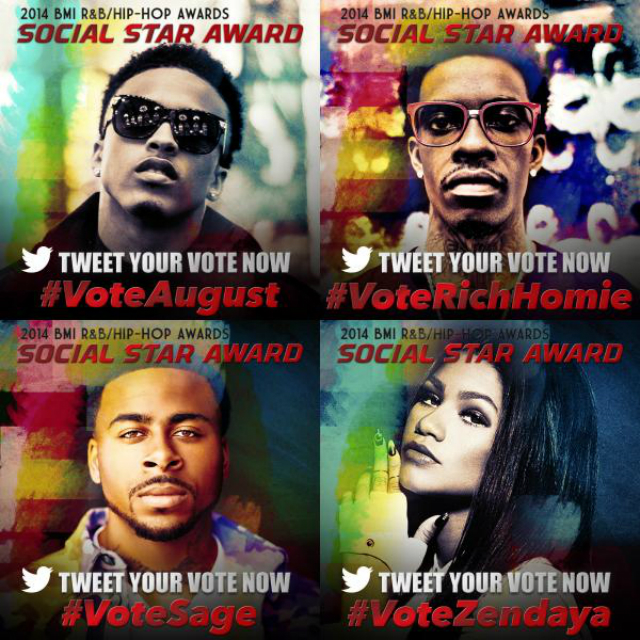 For those not in-the-know, BMI is a music rights organization that represents songwriters in all genres – basically the music industry’s version of the acting industry’s SAG or AFTRA. In layman’s terms, they get you money for the sh*t you write. Every year they honor the elite songwriters with various award ceremonies (depending on the genre), and this year’s Hip-Hop/R&B Awards will take place on Friday, August 22, at the Pantages Theatre in Hollywood.

For the third year in a row, the BMI Hip-Hop/R&B Awards will honor a popular new artist with their fan-voted “Social Star” award. The accolade is presented to the BMI songwriter who “best demonstrates the power of social to showcase his songwriting talents,” and after being nominated by BMI based on what they’ve already achieved, win based on their fan’s votes. In 2012, that person was Mac Miller, and in 2013, my homie Machine Gun Kelly.

For 2014, the Social Star Award nominees are rapper Sage The Gemini, singer/actress Zendaya, singer August Alsina and rapper Rich Homie Quan. Below, read why BMI chose each particular artist, then cast your vote for who you think is the real “social star” of the year!

So, who do you think should win? You can vote here (as many times as you’d like!) until August 19, and we’ll be sure to keep you updated on who wins on August 22! My vote is on Sage, because it’s HBK ALL DAY, SON!