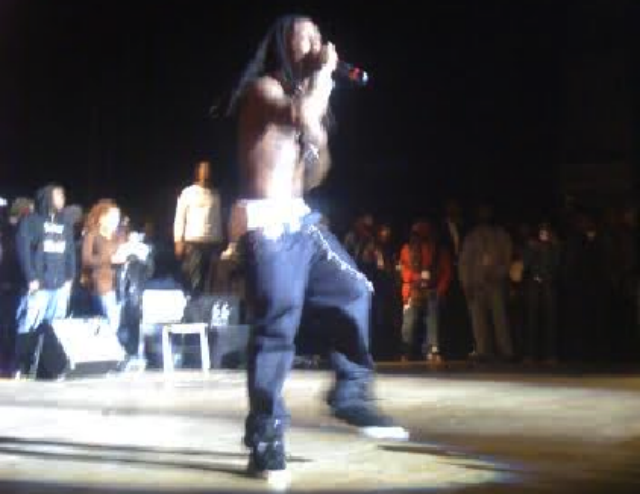 This was my first published article online! Back in 2007, I used to post a lot on AllHipHop.com‘s message boards, the “Ill Community.” I befriended one of the mods, Odiesel, and in February 2008, he gave me an opportunity to review the Lil Wayne concert I was attending in NJ.

From there, I interviewed a lot of dope artists for the site, and forged friendships with the owner, Chuck Creekmur, as well as my now-mentor, Kathy Iandoli. Thanks, OD!

Read the review in full below, via AHH.

The self-proclaimed best rapper alive did it again for fans at the Newark Symphony Hall in Newark, NJ on Sunday night (2/24/08). In town for a court date stemming from a July arrest, Weezy decided he’d make the most of his time here by doing a charitable concert, with proceeds going to the city’s “Stop Shooting” campaign.

While Wayne himself eventually put on a good show, fans of the rapper had to wait over two hours to see what they came for. The event was full of up-and-coming acts that the crowd was clearly not interested in hearing. At least five acts tried to entertain the restless ticket-holders, but with most of them being hardcore rappers playing to a majority white female audience, most fell short of even a head nod.

Two acts seemed to move the crowd at least slightly more than the others; they were white rapper Mr. Ozwald and 15-year-old rapper Young Jinsu. Ozwald’s songs had catchy hooks and a nasal delivery similar to a young Eminem, and Jinsu’s charming looks and cute songs had the young girls in the crowd cheering.

Finally, well after 10pm, the show’s host, Angie Martinez of HOT 97 fame, announced that Weezy was in the building and the crowd went wild. As the lights dimmed, music started blaring out of the speakers and after what seemed like the longest 2 minutes to this anxious crowd, Weezy burst onto the stage with an insane amount of energy and the screams from the crowd nearly drowned out the music.

While he disappointed some by not performing any new material, he did do a bunch of fan favorites including “I Feel Like Dying” and “Sky’s the Limit.” The surprise of the night came in the form of Juelz Santana, who assisted Wayne with a Cam’Ron-less “Suck It Or Not,” much to the crowd’s delight.

Wayne showed a fair amount of showmanship as he brought out his guitar for the sleeper hit “Leather So Soft,” and playfully interacted with the crowd over Soulja Boy‘s “Crank Dat.” He sang his heart out on the Supahead-inspired “Prostitute,” but clearly the synthesizer applied to his voice is what makes the song even remotely listenable.

Wayne’s energy was intense throughout the show, but he definitely could have performed much more material for the fans that paid upwards of $170 to see him for only slightly longer than an hour. He did delight the girls in the crowd with his infamous “P***y Monster” song, and truly became a beast for his verse on “We Takin’ Over;” putting his mic on the floor and slowly crawling to it on all fours with his dreads hanging over his face, then pouncing up like a panther to rap his verse.

All in all, Birdman Jr. delivered an energy-packed but all-too-brief performance. Also, there were way too much entourage onstage with no role. If you paid to see Wayne and Wayne only, then it was very well spent. Next time, less opening acts, and way more Weezy please.