Imitation is the sincerest form of flattery…unless you’re Lil Kim, in which case intimation is the cause for a never-ending feud. For the second time in the course of a week, the veteran MC (and new mother!) has released a diss track (read: struggle song) aimed at her arch nemesis, Nicki Minaj.

“It’s looking like I’m headed back behind bars again/cause b*tches wanna start with Kim and I ain’t with the arguing,” Kim raps on “Identity Thief,” adding, “Anything you try to do, I done did it/ The Queen’s back, b*tches come get it.”

Kim, you are the Queen, yes…but you are certainly not back. In fact, you’re regressing immensely, and it makes us pretty sad because your legacy is one for the books. Where’s the Kim that spit venom on an escalator? Where’s the Kim that rapped about her “Crush On You” while rocking every color wig under the sun? Hell, we’ll even take the Kim that put her “Lighters Up” when she got out of jail in 2005. Between the endless plastic surgery and her apparent obsession with Nicki (who has been the only female raptress since Kim‘s heyday that actually gave her competition for the crown,) it’s looking like the Queen Bee has a very, very deep-rooted insecurity issue.


It’s clear that Nicki Minaj has been influenced by Lil Kim in her career, and she’s said it herself numerous times since her introduction into the game in 2007.

“Kim is the pioneer for my generation,” Nicki told Marisa Mendez in a 2009 interview for AllHipHop. “She’s the trend setter. She’s the Queen Bee.”

The Pinkprint rapper assuredly didn’t set out to re-invent the wheel. When you see a formula that works – attention-attracting outfits, sexually-explicit lyrics, dope bars and a strong camp – naturally, you’re going to take pages out of that book. Of course you’ll add your own twist to it, but why fix something that isn’t broken? 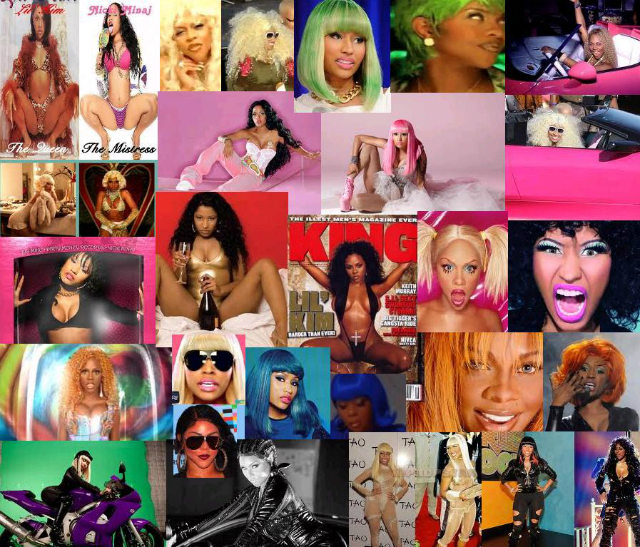 In 2010 when Nicki released her debut album, Pink Friday, Lil Kim had not released an album in FIVE years. At that point, hip-hop was looking to usher in a new queen for that time period, taking absolutely nothing away from what Kim has done for the game. Unfortunately, Kim didn’t want to pass the torch. But why? Just a couple of years prior, the ladies were all smiles backstage on Lil Wayne‘s tour, and it seemed that much like Wiz Khalifa and Snoop Dogg‘s friendship years later, the OG and the newbie were going to make a great team…so what happened? 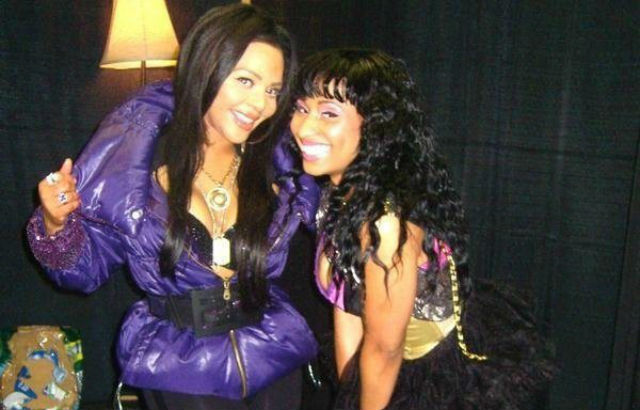 For Kim‘s part, she felt that Nicki had been taking subtle jabs at her in her music on releases like her 2008 mixtape, Sucka Free, and 2009’s Beam Me Up Scotty. But what about that whole, “If it don’t apply, let it fly” thing? This may be where Kim‘s potential insecurity came into play, taking the lyrics personal.

As time wore on, Kim went on several interviews saying things like, “If you are going to steal my swag, you gonna have to pay. Something gotta give. You help me, I help you. That’s how it goes to me.”

Eventually, Nicki released her “Roman’s Revenge” track, no longer holding her tongue for her idol.

“Look at my show footage, how these girls be spazzin’/ So f*ck I look like gettin’ back to a has-been?” Nicki rapped. “Yeah, I said it, has-BEEn/ Hang it up, flatscreen.”

She then addressed it directly in an interview with Angie Martinez on Hot 97 just before Pink Friday dropped.

Nicki has never again addressed the topic, though she could have possibly been referring to Kim in various lyrics since then. To the contrary, Kim has released various songs aiming at Nicki, even dedicating an entire mixtape to her in 2010.

There’s not one person that ever disputed any of Kim‘s credentials. She’s won awards, blazed trails, topped the charts and had men and women alike bopping in their seats since the 90s. She invented a style that many “femcees” emulate because they look up to her, but at what point are we going to call it what it is? Lil Kim cannot handle the fact that she was the first to do it on such a major scale, and others have surpassed her by crossing over and still being relevant in hip-hop.

Kim is slowly diminishing a legacy that she worked so hard for! It saddens us and other hip-hop enthusiasts to watch her so desperately cling to the limelight. It’s clear that the Queen Bee’s reign is over, but honestly – that isn’t a bad thing! Once you become greatness, no one can EVER take that away from you, but when you continuously try to pull people down who look up to you, you begin to tarnish your own image. In history, when a queen decides to step down from the throne for any reason, she is still respected and regarded as such, and the same goes in hip-hop. Nicki Minaj and Remy Ma‘s relevancy does not make Lil Kim‘s legacy any less notable, but her constant efforts to bring them down will.

Kim, slow down and just enjoy this beautiful time with Royal Reign and Mr. Papers. Consider closing this chapter and simply joining this amazing new wave of girl power the music industry is seeing…not only with Nicki and Rem, but Iggy Azalea, Azealia Banks, Angel Haze, Brianna Perry, the list goes on. PLEASE!