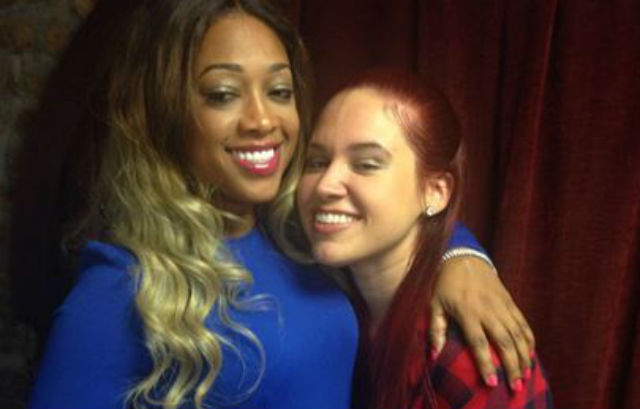 I interviewed the baddest b*tch, Trina, for AllHipHop.com. Read it in full below, via AHH!

Hip-hop’s Diamond Princess is back on the scene, gearing up for the release of her fifth studio album, Amazin’. Female rappers are a rare species these days, and ones that have lasted for nearly a decade? Almost extinct. But Miami native Trina seems to have a secret success formula that perhaps some of predecessors should consider sipping.

Debuting her sound a little over nine years ago now on Trick Daddy‘s first single “Nann,” the one-time real estate agent has made it through the 2000s with four successful albums under her belt, no major scandals and very little drama. AllHipHop.com checks in with Trina to talk album number five, Nicki Minaj, and to see if maybe we can get a little hint of this success formula.

AllHipHop.com: So you have an album coming out. What avenue did you take creatively with this one? Is it different from your previous four?

Trina: Yep, the album is titled Amazin and I’m really excited about this project. It truly shows my growth as an artist, as every new album from an artist should! It’s just a lot of change, it’s energetic, it’s raw, it’s street and it’s diverse. It’s everything! Singing on it brought the emotion. It has a lot of really good features, too. I got Keri Hilson, Ludacris and so much more. It’s going to be a lot of surprises for y’all. I also have my new group, Pretty Money, on there.

Trina: Pretty Money is an all-female rap group I’m working with. They’re based out of my hometown, Miami, and they’re dope. You’ll be hearing a lot from them.

AllHipHop.com: Your last album was over a year ago and prior to that, it had been about three years. What have you done in your time off or gaps rather?

Trina: It’s like, if I’m coming out with album after album so soon, it’s not going to give anyone something to anticipate and look forward to. And creatively, it’s not really going to give me much time to grow and experience new things and get new inspiration. But it’s definitely not me just sitting around and relaxing. I’ve always got my hands in something. I have a lot of other projects aside from just rapping that I get involved with, and the time off allows me to focus more on those things as well. I also do a lot of touring overseas and I’ve been working on a reality show. So really even though sometimes y’all may not always see me, know that I’m always working.

AllHipHop.com: Well going with that – I know you have a clothing line, a perfume line, a foundation for young women. How are all of those things going?

Trina: Right now we’re working on revamping my clothing line and perfume collection. You know, the economy is really crazy and I want to make the clothing more affordable, but of course glamorous at the same time. As far as the foundation, that’s really great. Right now it has more than 600 people helping out. I’m changing it up a little bit. Instead of the usual panels, I want to make it more of a show. We discuss sex, we talk about alcoholism; we’re trying to show these young women that all of that is definitely not the way. We get the girls glammed up and fly too, giving them that extra boost to show them they don’t need all that other stuff. Just be confident in who you are, you know? We want to bring awareness to the reality of what’s going on. Girls that are as young as 13 ask me about sex and I’m like man, that’s so young! But it’s absolutely a reality we have to face, and I’m glad they feel they can come and talk to me about these things. I want to be able to help whoever I can. I’m also involved in another foundation. It’s new; its called Bullets for Peace. We’re working towards not making guns accessible. I almost lost my brother to gun violence and with all of these shootings and just plain violence amongst people, it has to stop.

AllHipHop.com: Now your lyrics in the past have been overtly sexual and suggestive, as well as pictures. At times it seemed like people would focus on your assets more than your talent. Do you feel that’s changed now and that people focus more on Trina the entertainer and entrepreneur, or are you still struggling with that?

Trina: I mean, if I struggled with it and let it really get to me, I wouldn’t still be here. I had to learn to embrace it, and the fans definitely did too. I’m not going to sit here and act like I don’t know how that happened. I know what I rapped about. It’s entertainment. But again, I’ve grown, and with every album, you’ve seen so much more diversity with my music. But yet, there is a very manipulative aspect to this industry too; especially with the pictures. A lot of times, I wasn’t even trying to pose that way. It’s like, I’ll take a million nice pictures not focusing on my butt, and they get that one shot that did and that’s what they print. I look back sometimes and see all these pictures and think, ‘Man, why is my butt showing in every single one?’ It’s just how it is. People judge you for everything and they’ll say what they say, but at the end of it all, just know your craft and know what you’re capable of. What they say doesn’t define who you are – you do. My fans have been with me since day one and embraced who I am and my growth, and that’s all that truly matters.

AllHipHop.com: Over the past year, Nicki Minaj has made quite the name for herself in the industry, especially in the female emcee lane that was quiet for a while. With Lil Kim and Eve off on other avenues and Remy and Foxy gone, you kind of had the lane to yourself for a while. Do you feel any competition now with Nicki making such a wave in the music world?

Trina: You got to look at it like everybody is competition – female, male, rapper, singer – don’t matter. But I’ve been doing this for a long time and there is enough money for everybody to get it. I love Nicki Minaj, I love what she’s doing. She’s on my project! She reminds me of when I first came out. She has this great energy about her. And Beyoncé – she’s my favorite entertainer in the world, nobody is better than her. She is the baddest. She’s done a lot for that genre of music and nobody can deny that. I love Lil Kim, Eve, Teyana Taylor – all the females. We need them, we need those categories. Being the only one doing it would get boring.

AllHipHop.com: You’ve definitely lasted a very long time in this industry. That’s a lot more than most can say. What do you think you’ve done that’s attributed to your longevity in the game?

Trina: I think it’s my confidence and the fact I give people props. I love seeing everyone make it and I love what I do. Hating on people and causing beefs and drama – it’s not going to get you very far at all. You get too busy focusing on other people that you lose focus on yourself and what you’re doing. I’ve been getting money for the longest and I’m not stopping.

AllHipHop.com: Do you feel that’s a reason why a lot of other female emcees haven’t made it as far as you have?

Trina: It could definitely be a contributor.

AllHipHop.com: Your past in breaking onto the rap scene was a little nontraditional. You were working in the business field first and were given an opportunity with Trick Daddy to jump on what turned out to be his first single. What do you think would have happened if you never got on “Nann”? Is rap something you think you still may have pursued somewhere down the line?

Trina: I definitely was blessed to have Trick give me that opportunity, and never in a million years did I think all this would come from it back then. It’s amazing. I can’t say for sure I would be rapping because it was never something I was really going for, but I know I definitely would have done something in the television/entertainment industry. I think maybe down the line I would have rapped.

AllHipHop.com: Are you still down with Trick and Slip N’ Slide?

Trina: Of course! That’s family. That’s what Amazin is coming out on.

AllHipHop.com: Do you have any last words?

Trina: Well, can’t forget I’m doing my first movie role in The Cookout 2. It’s a small part but I’m proud of it and I’m really excited about it. Like I said earlier, I have my reality show I’m working on. I’m definitely looking into more movie roles as well. I’m strong, I’m independent and I’m happy. And of course, the album coming soon! It’s Amazin!