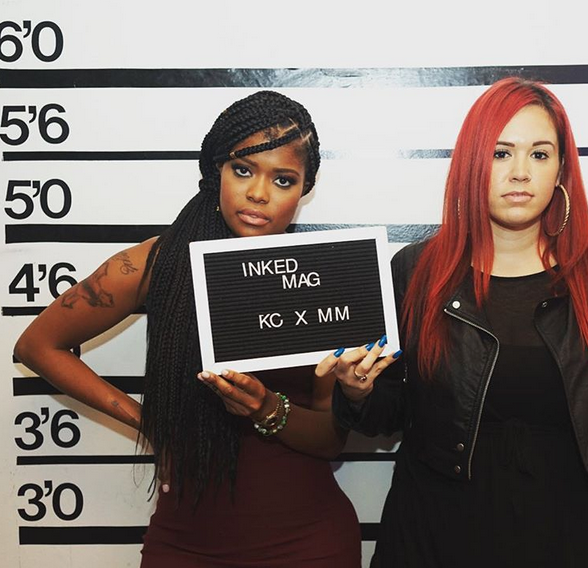 Inked Mag gave me the opportunity to get some new ink, and talk to my girl Karen Civil about her new book. Below is an excerpt, with a link to the full interview at the end.

Karen Civil is a Jane of All Trades. While helping grow the digital footprints of artists among the likes of Lil Wayne and Jeezy, the New Jersey native has simultaneously built a personal brand so reputable that Hillary Clinton employed her services at a recent campaign rally in Atlanta. Funkmaster Flex’s former intern went from answering phones and ordering his dinner to having 15 employees of her own and owning multiple companies, creating a story great enough to turn into a book. So she did.

Just days before Be You & Live Civil became available, Karen and I met up at Inked‘s headquarters to add to our respective tattoo collections. The book’s release landed on Karen’s birthday, so while it was certainly a great gift to herself as far as personal endeavors go, it’s also quite the gift to others.

“It’s really just about helping people become well-rounded individuals,” she explains as Leathernecks Tattoo’s Kenny K-Bar works on her new ink. “It’s about self-motivation, finding your happiness, your inner peace. It’s not really music industry-related, but rather about you unlocking your potential and finding your purpose.”

After the successful launch of her hip-hop entertainment website in 2008, KarenCivil.com, Karen would later go on to create LiveCivil.com, a portal catered toward positive affirmations and tips for a better living. Suffice to say, Be You & Live Civil is right on brand with that. And while she’d scored a deal through rap mogul Birdman’s publishing partnership with Simon & Schuster, she’s putting this one out on her own. However, that one’s still coming.