Now that Flex has reunited the Diplomats (who’ve infamously feuded with Jay in the past,) he has been working on a major tour and projects for the guys, and Life + Times once again reached out to get the 411. This apparently set Flex off, as he felt it would be a similar situation to the app fiasco, and instead of granting the interview, he went on air on Hot 97 and blasted the site and its owner/his former friend, Jay Z. He also mentioned that it’s funny they’d want an interview, since it was Jay‘s very own 40/40 club that once specifically told him that he cannot play any Dip Set records.


Now, I don’t have much more information than the rest of you, but I can tell you this: Flex is a VERY smart man. In fact, he’s the smartest person I’ve ever met. On the surface, it’s very easy for us all to say that 1 – Why would Jay want YOUR ideas for an app when he could go to some billionaire genius guys if he wants to? 2 – There’s a 99% chance he doesn’t even know about/call shots on a majority of the editorial pieces on his site. 3 – How dare Flex come at a legend like Hov? But trust me, if it got to this point, there’s a lot more to it than what we can see or theorize. Like I said, Flex is a very smart man. And let me add – his ratings are ALREADY amazing, as are his website stats…so he’s not lacking and/or trolling for anything in those areas. Be clear about that.

After this rant, Jay apparently tried calling Flex the next day from a private number, then eventually texted him writing, “This is HOV.” Instead of responding, Flex shared the text on social media, captioning the picture with:

(I definitely texted Flex and let him know that the iPhone capitalizes HOV in autocorrect, but I’m still with him. LOL!)

Shortly after that, Cam’Ron and Jim Jones reignited their beef with Jay too, and released their “Victory” freestyle. 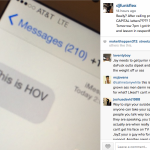 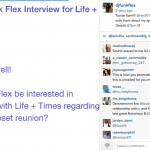