What happens when a black kid from California models the name of his indie music festival after one of the biggest festivals in the country? Well, you get a cease and desist letter, and the threat of a $100 million lawsuit from the lawyers of that bigger festival, apparently.

News of a “Hoodchella” meltdown was taking over our side of social media, and had even made its way to TMZ. A few times. In no time at all, the concert that was originally scheduled to be a 1-day show of performers and DJs, had grown to a 3-day fest with over 100 names filling up the bill.

In February, however, we got to speak with Hoodchella co-creator Bearcap Sunday about what had happened to his brainchild that took after the name of the Coachella Music Festival, now known as Noise In The Hood. The 3-day festival kicks off today and will last until Sunday April 10.

Read below, and purchase tix for the event on the official Noise In The Hood website.

LIT: What was the vision behind Hoodchella? What happened to the festival?
BC: My vision was to throw a dope ass music festival like Woodstock, back in the day. There’s no major headliners in my show. There might be some big underground acts, but no major names. I wasn’t officially sued by Coachella, but they did serve me a cease & desist letter, and threatened to sue me for $100 mill if I didn’t drop the name.

LIT: Who is Hoodchella/N.I.T.H. for? What does the culture of the festival represent?
BC: Hoodchella’s for the homies. Local artists, and people that I’m really tight with. I wanted an all day/all night party with underground artists. I’m also an artist who throws shows.

LIT: Why is Hoodchella/N.I.T.H. important? Why is Coachella wrong for what they did, or why did you feel attacked?
BC: [It’s important because] Nobody else is doing this. It’s 100% underground rap & hip-hop. With the cease & desist letter, I felt like ‘Why are they coming after me?’ I couldn’t find a solution to a unique problem, because there’s not another festival going on like this. Coachella was just petty. There was no branding similarities, no flyers; it was not visually possible to associate the two concerts. They just didn’t like my name.

LIT: When did you first have the idea to create Hoodchella? Who are the people behind the festival, or is it all you?
BC: Years ago. I knew what I wanted to throw, as far as a music festival. I kept it a secret and just branded it really well. We had the first concert last year. The people behind it is me and my girlfriend Chastity Londyn.

LIT: How did you feel when you first learned about Coachella’s legal moves?
BC: Mad as hell! They actually pulled up to my girlfriend’s house first, served her the papers and said, ‘Don’t tell your boyfriend; we’re going to visit him too.’ Like what kinda shit…

LIT: Would you ever just not do the concert?
BC: Nah, we’re still going to go on. It was cool to be on TV, but it was negative energy. I feel like it confused people about what we’re trying to do. It definitely fucked up our sales.

LIT: How many people are you expecting for Hoodchella/N.I.T.H.?
BC: We’re expecting a good 1000+ a day. We have 100 artists, and they’ll definitely bring out people, so do the math.

LIT: What would make you just say fuck everything, and keep the name?
BC: If we had the money, we could’ve won. That’s what the case is about. 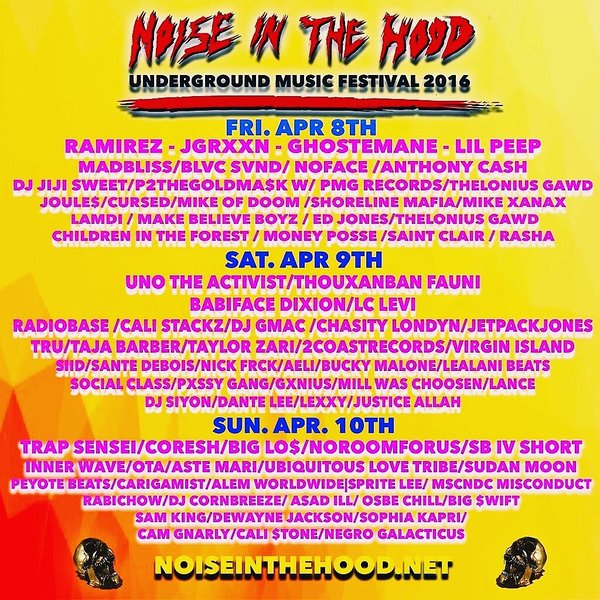