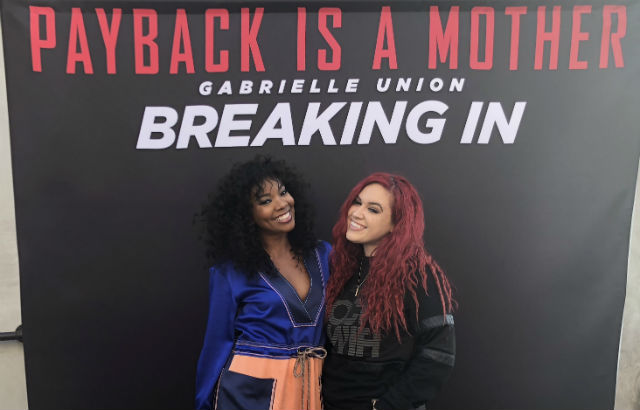 Thanks to the fabulous folks behind Gabrielle Union‘s new film Breaking In, I (along with other influencers) was invited to take a self-defense class taught by the movie’s fight coordinator, Tim Connolly! Afterward, we had some cocktails with Gabrielle herself, as well as the movie’s director, Will Packer. What an awesome day!
END_OF_DOCUMENT_TOKEN_TO_BE_REPLACED 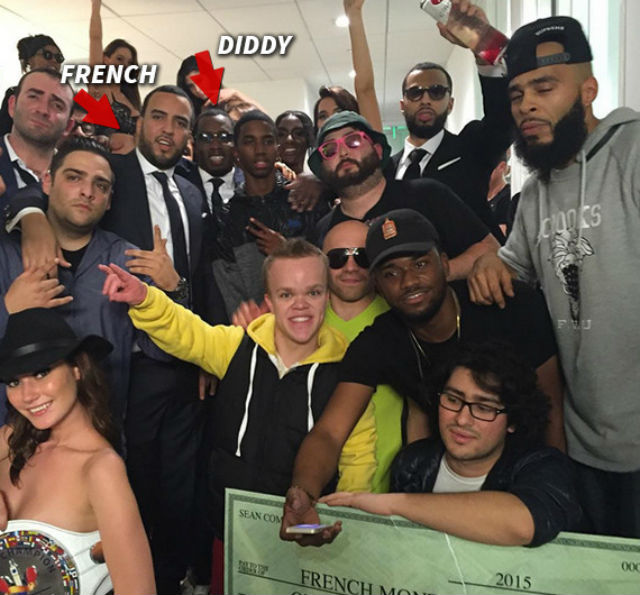 Perhaps in the celebratory mood, Puff decided to gift his Bad Boy artist French Montana with a cool $1 million later that day. And being equally as giving, French decided to donate it all to the charity he just started in his south Bronx hometown, helping the local schools and young kids. So dope of him!
END_OF_DOCUMENT_TOKEN_TO_BE_REPLACED 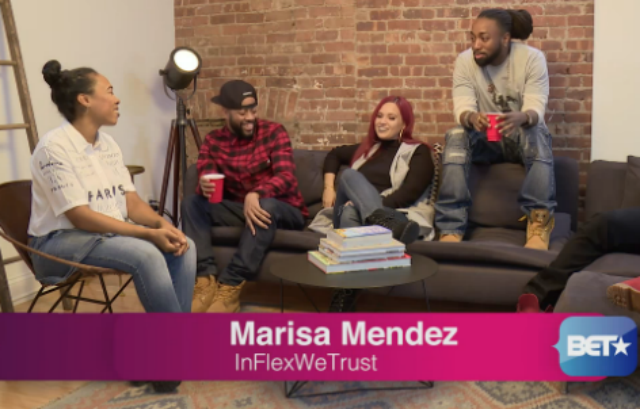 Earlier this month, my good friend Kathy Iandoli asked me to be a part of a panel of experts to discuss 2015 for BET‘s year-end wrap up, so of course I said yes! Along with some of my favorite people like Sway In The Morning‘s Tracy G, YouHeardThatNew/Beats1‘s Lowkey, The Source‘s Simone Amelia, The STASHED‘s Kazeem, ThisIs50‘s Jack Thriller and more, we discussed all the highs and lows of 2015.

Check out the clips below. Such an honor to be a part of this!
END_OF_DOCUMENT_TOKEN_TO_BE_REPLACED 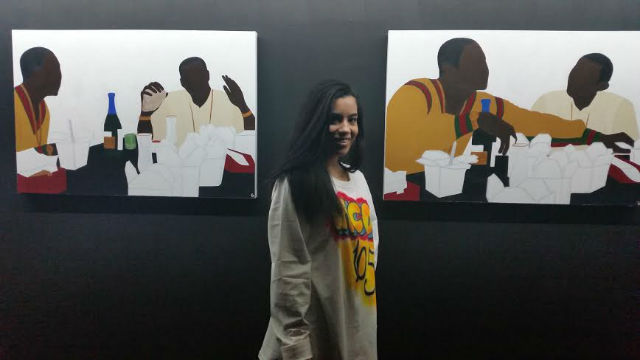 “No ribs, no rice, no champagne,” surely comes to mind when looking at the two paintings in the above photo, and the beauty in the middle is the brainchild of it all. Burgeoning artist Rebecca Maria‘s first solo show paid homage to the classic film Paid In Full, featured at Poppington Art Gallery in NYC yesterday.

The exhibit, which featured Rebecca live-painting one of her 14 pieces of work, was accompanied by 80s and 90s-themed music, giving guests a feeling of nostalgia. “This is a great addition to the Paid In Full legacy,” one attendee noted, referencing the almost 40-year history that includes a movie, Eric B. & Rakim‘s album, and the true-life story of Rich Porter, Alpo and AZ. 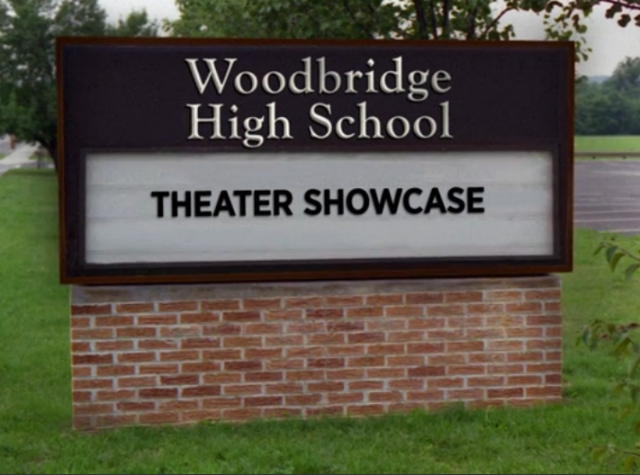 I have to share this awesome skit from Saturday Night Live this past weekend! I never watch the show, but I just so happened to catch this episode because I was actually there for the taping, thanks to my girl Christina and her hubby/SNL cast member, Kenan.

Though the actual skit has nothing to do with my alma mater aside from using its name (that’s not even our sign,) I almost fell off the chair when I heard ‘Woodbridge High School‘ being name-dropped! Go Barrons! It makes total sense that this happened, because Cameron Diaz (who stars in the skit) and I are pretty much best friends, after we were on the same flight from NJ to LA earlier this year and we smiled at each other. I’m sure she knew I was coming because of our BFF telepathic connection, and told the writers to incorporate my high school into the show. Amiright?

Check out the hilarious skit below, which features Cameron as a weird theater kid, and Kenan Thompson and Vanessa Bayer as annoyed parents forced to sit through the avant-garde performance. (The boxes are definitely the best part!)
END_OF_DOCUMENT_TOKEN_TO_BE_REPLACED

Though my generation of late 20-somethings have long since stopped watching this program, it’s definitely a feeling of nostalgia, as we were the first audience that they catered to! We’ve watched Free and AJ when we got home after middle school and high school. We felt the emotions when they left. We were annoyed by Tigger and Julissa‘s entrance, and skeptical but eventually delighted by Rocsi and Terrence later replacing them. (It was around then that a lot of us went on to college and kind of grew out of the show.) Literally none of us cared about Bow Wow and Keshia Chanté, and clearly the current audience didn’t care too much either. I wonder if Bow is regretting balling out on Erica Mena‘s birthday last week, now that he’s soon to be out of a job…
END_OF_DOCUMENT_TOKEN_TO_BE_REPLACED 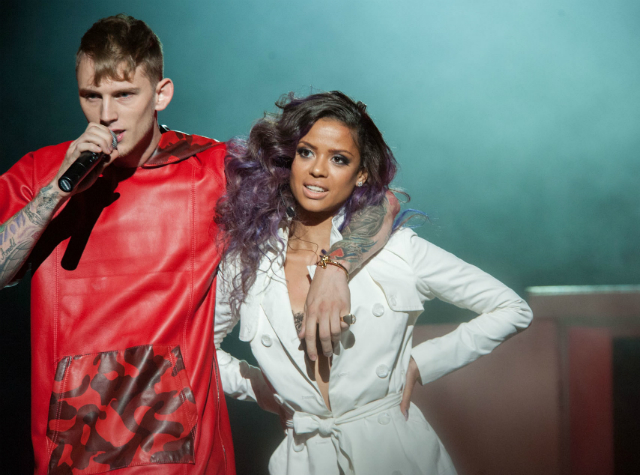 This Friday, Colson ‘MGK‘ Baker will make his big-screen debut, starring as Kid Culprit in the romantic drama, Beyond The Lights. The Cleveland rapper was introduced to the masses in 2011 with the success of his breakout single “Wild Boy,” but has since remained relatively quiet on a mainstream level since his 2012 Bad Boy/Interscope debut, Lace Up, as he toured the world and shot not only Beyond The Lights, but two more as-of-yet unreleased films as well. He’s also been preparing his sophomore effort, which he says may have its first single out within weeks.

Suffice to say, MGK has been a busy guy, but unless you’re a fan or follow his social media, one likely wouldn’t know that he’s been up to much of anything. To many, this film will be his re-introduction of sorts, and what better way to do so than with a role that showcases not only his acting chops, but his rapping as well.

“When it came time to cast the role of Kid Culprit, I knew I wanted a real hip-hop artist,” the film’s writer/director Gina Prince-Bythewood said about choosing MGK for the role. “I saw the video for ‘Wild Boy,’ and he just seemed to exemplify who the character was. So we had that first audition, and I was intrigued by him a lot. Then I had him come back and read with Gugu, and their chemistry was so good! We want an artist who wants it badly because they’ll give you everything, and he really did.”

I got the opportunity to watch the movie before I spoke with MGK last week, and I truly enjoyed it. As a woman working in music, the pressures Noni faced were all too familiar, and the roles of her mother and Kid Culprit are common figures we meet often. I was really impressed with Kells‘ acting too, as I wasn’t sure what to expect from him, but I automatically connected with his character, rather than getting the vibe that he was out of his element.

Below, check out what MGK had to say about his debut role, why he wouldn’t change a thing about it, why his five-year-old daughter is a little jealous about it…and get an itty-bitty clue about his forthcoming single from his sophomore album!
END_OF_DOCUMENT_TOKEN_TO_BE_REPLACED