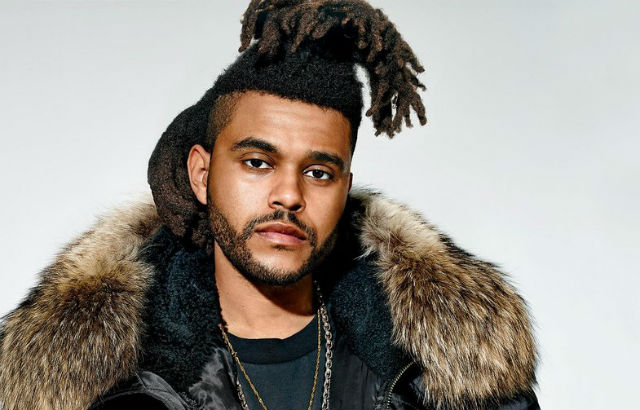 Can someone please explain to me like what exactly is going on in The Weeknd‘s hair? It’s like dreads but an afro but like not. I just…I just don’t get it.

Moving on, The Weeknd‘s new album Beauty Behind The Madness drops next Friday, August 28, and he’s actually doing interviews for it. Over email, the Canadian hit-maker checked in with GQ, and dropped some interesting tidbits that I feel like you guys might care about. I gathered the 7 best gems below.

1. He’s going to be doing more interviews this time around.

“I think I really avoided questions because I felt uncomfortable. I get naturally uncomfortable when I’m put under a magnifying glass. I think when I said I had nothing interesting to talk about, it was just instinct, I was dodging the question. I think I’m a little less awkward now.”

2. He’s not back home in Toronto as much anymore.

“I’ve been in LA a lot, so that should answer your question.”

3. He likes being considered “too creepy” for some.

4. Waka Flocka and Ed Sheeran had a battle in his kitchen.

“I wrote a song with Ed Sheeran that was kind of spontaneous. He was hosting the Much Music Awards in Toronto and I invited him, and pretty much the entire awards show, to my condo to party. It went on until about 5 in the morning but we didn’t write the song until that next day, so you can imagine how that night went. Ed also did a freestyle battle with Waka Flocka in my kitchen. That was pretty dope. Good times.”

5. He wrote a song in Marilyn Monroe‘s old bedroom.

“Max’s studio used to be Marilyn Monroe’s old house and I came up with the concept for a song called “In the Night” in her bedroom. That was pretty amazing. Unfortunately I couldn’t help but imagine Joe DiMaggio’s sperm everywhere on the floor.”

6. He loves Kanye‘s clothing for adidas.

“I really felt like he targeted someone like me. The camo, the army look, the black boots, the nonchalant kind of vagrant look. I relate to it. It relates to my story.”

7. I actually don’t have a seventh gem, but I like to stick with the number 7 around here, so here we are…